Gingham And Some Of Its Famous Wearer

If you have been following the latest fashion trends lately then it is impossible to ignore the gingham shirts and suits in different pattern sizes and colors. For those who still remember Sean Connery wearing a red and white gingham shirt with his swimming trunks in the 1963 James Bond movie From Russia with Love, or Marilyn Monroe combining her gingham men shirt tied up over her jeans in the 1950s might realize just now how long this cloth has been around. But its history goes back much further.

Gingham And How It All Began

Unravelling its first myth, gingham actually refers to a simple, woven cotton or linen cloth, which originally had a bright colored stripe. The name derives from the Malayan word genggang, which means “striped”. It was later adopted by the Dutch who had colonies in Malaysia and Indonesia and renamed to its better known name “gingham”. Based on this fact, it is more likely that the fabric originated in this area even though many other countries claim it as part of their own textile history. In Japan, gingham has a spiritual meaning, and up until today more cotton gingham is produced than in any other country. Germany claims the cloth to have originated in Bavaria; Italians place it in Northern Italy, and the French call it “Vichy” due to its origin in the Vichy region. Needless to say, the USA points out their century long production of gingham fabric for other counties making it more American than any other cloth.

The word gingham first appeared in English in 1615 and referred to the striped cotton fabric exported from Asia to Europe and US colonies. It was not until the mid -18th Century that textile mills in North England produced the first two colored checked pattern, which would later become the gingham fabric we all know.

Gingham And How It Conquered The World

In many European countries, the check became a popular pattern for clothes, domestic use, and home furnishing. It was a simple and inexpensive way to follow fashion and wear colors in a post-war era. Seaside glamor and recreation in the 1950s made gingham boost in both the US and Europe, where gingham shorts, swimsuits and tops were spotted on Hollywood stars such as Grace Kelly, Audrey Hepburn or Doris Day. It sort of symbolized nostalgia for light-hearted times and patriotism for the country’s own manufacturing history. While the US associated the fabric with some sort of rebellion, rock n’ roll and the wild west, the UK discovered gingham as a perfect fabric for modern clothing for fresh youthfulness in the 1960s; its look contributed to the smart and casual dandy look of the mod style. British youth wearing gingham shirts combined with Italian and French tailored suits would now meet in Italian or French cafes and indulge about new art and music with new immigrants. Ben Sherman and Fred Perry are two designers worth mentioning who made gingham shirts a popular trend for British mods.

Up until now, gingham represents a mix of youthfulness and nostalgia, or better said, a youthful and modern appeal for old-fashion values.

Our collection includes a wide range of blue – white, and black-white gingham shirts in various patterns. Large checks are recommended for the fashion conscious individual and can be combined with casual two piece suits in white or blue or jeans. 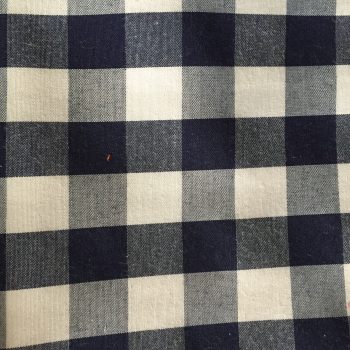 Medium size gingham shirts are perfect for any business outfits as well as for the drink after and can be worn with suits or blazers. 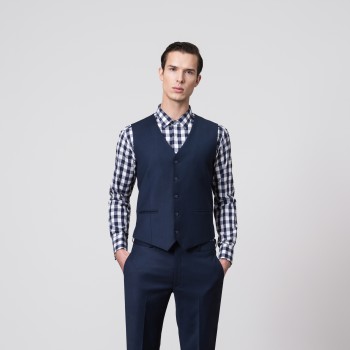 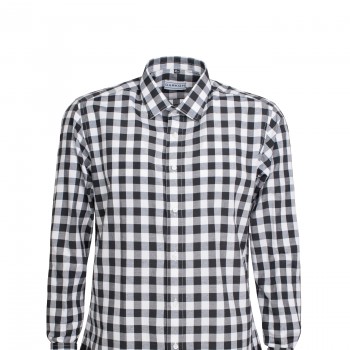 For those individuals who are new to the pattern section, we designed a shirt with a rather small check; a rather comfortable entry into trying out pattern shirts. 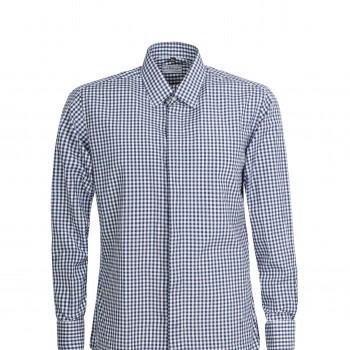 For trendsetters, we created a complete gingham suit made out of a light cotton weave. It can be worn as one piece or combined with other wardrobe items. 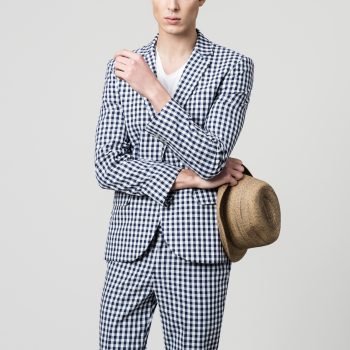